Finally, with this monkey off my back, I could refocus my energy on our podcasts, this website, and the games that I had been ignoring. I played Uncharted 1, Uncharted 2, Uncharted 3, Uncharted 4, Until Dawn, Rise of the Tomb Raider, and Inside. And it was great. I felt like a real gamer again.

Then someone messaged me about two weeks ago. Someone from my past. Someone who enabled me time and time again.

“It’s Iron Banner this weekend in Destiny. You can get the gauntlets you need to hit max light level.”

And with those few words, I was back. Just for two hours, but I was back. I haven’t played since, but it forced me to admit to myself that I’ll always be a Destiny addict. I was left with no choice but to check myself back into a more intense version of Retro Rehab. I’ve added an extra step to make sure my sobriety sticks for good this time, but for now, it’s time for step 3, Super Mario World.

Super Mario World was perhaps the perfect game to play to get me back on track. Admittedly, it was also the game that pushed me back into the embrace of Destiny. When I began my journey as this portly Italian plumber about a year ago, I wasn’t ready. I wasn’t ready to be challenged. I wasn’t ready to replay the same level over and over again. When I beat a level in the Forest of Illusions only to reveal a track that led me right back to the very first level, I swore off the game. This concept was just so foreign to my modern gaming sensibilities. It took me over a year to get past that mental block, but when I did, I was rewarded with one of the best experiences of my gaming life. Super Mario World reaffirmed to me why I fell in love with gaming 20 years ago, and it gave me a renewed sense of purpose as I trudge forward in my Retro Rehab program.

Super Mario World is the perfect blend of pinpoint accurate controls and immaculate level design. Every Goomba, platform, and power-up is methodically placed to challenge, but also to teach the player how to advance in the game. The game’s levels increase in difficulty gradually, imparting new gameplay tricks as the player progresses. While the first few worlds can typically be beaten in a few tries, later worlds can take hundreds of attempts to complete. This tried my patience, but also resulted in some of the most satisfying gaming successes I have ever experienced. When I finally toppled Bowser (sorry friend), I felt a real sense of accomplishment. I never realized how much I missed that feeling, and I hope to get it from the rest of my steps in my rehab program.

Typically I would end this post with a video of me beating the final boss, but I wasn’t recording my successful attempt. In lieu of that video, here’s a screenshot I took with my phone (apologies for the potato quality). 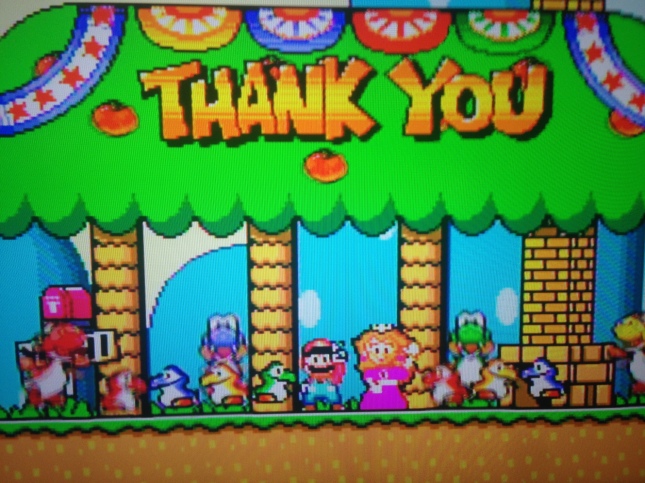 No, thank you Super Mario World!

If you really want a video of the final boss, check out this video of Steve struggling through Super Mario World thanks to the lag-ridden Retron 5.

Macho Man appreciates this thing almost as much as me. The Framemeister XRGB-mini is absolute magic. #framemeister #xrgbmini #rgb #supernintendo #snes #machoman
What the fuck just happened? I just got straight Steven Avery'd. #ChronoTrigger #MakingAMurderer
Finally started #ChronoTrigger
%d bloggers like this: