There’s no need to beat around the bush. It’s time to reveal our top ten Super Nintendo games and wrap up the inaugural class of the gametimebro Hall of Fame. In case you missed them, or simply need a refresher, the first ten games on our list can be found here, and the next ten games are listed here.

Suppose you’re Nintendo in the early ’90s. You’ve just released Super Mario World, a massive success both critically and commercially, and the new standard against which platforming games will now be judged. How do you follow up in developing the inevitable sequel? Apparently, by throwing everything out the window. The sequel is now a prequel, the hero is no longer Mario, and the engine and aesthetics of the game are entirely new. Instead of vanquishing enemies with feather capes and fire flowers, gameplay here consisted mainly of tossing eggs and guarding babies. Yoshi’s Island was a bold risk from Nintendo, and their daring originality paid off pretty well. Featuring an array of memorable stages and boss fights, this was one of the best platformers on the Super Nintendo, and possibly the prettiest-looking game overall with its “kids’ crayon drawings” art design. Its biggest crime was being Super Mario World 2 in name only, but if every game could be faulted for not being enough like another game, we’d still all be playing various versions of Pong.

In another shining example of a sequel to a beloved and popular platformer shaking things up, Donkey Kong Country 2 sidelined the franchise’s titular gorilla for the entire game, elevating former second banana Diddy Kong to a starring role in the aptly titled Diddy’s Kong Quest. The game introduced Diddy’s girlfriend Dixie, a beret-wearing chimpanzee capable of taking out enemies and helicoptering across large chasms by means of her ponytail. Updates to the gameplay and graphics were minor, and the biggest changes aside from Dixie tagging in for DK involved the animal buddies. Gone for this installment were Expresso the sneaker-clad Ostrich and Winky the high-flying Frog, but replacing them were Squitter the web-shooting Spider and Rattly the spring-loaded Rattlesnake – companions who, fear not, wore four times as many sneakers and jumped twice as high, respectively. Perhaps the best change made to Donkey Kong Country 2 was shifting the setting away from the jungle and into a seaside world teeming with pirates; giving the Kremlings peg legs and little skull-and-crossbone hats was an impeccable touch. 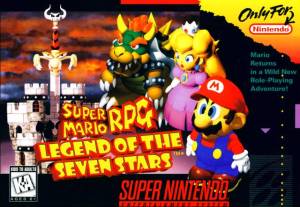 There’s little better in the gaming world than a brilliantly executed genre-swapping spinoff. The idea of Mario in an RPG isn’t novel today, when we have two distinct and separate mutliple-installment Mario RPG series in Paper Mario and Mario & Luigi. Before any of those games existed though, Super Mario RPG paved the way by showing just how seamlessly Mario’s established attack repertoire could be adapted into a turn-based combat system. In teaming with Square in the midst of their ’90s-spanning golden age, Nintendo put forth an impeccably polished and beautiful RPG at the tail end of the Super Nintendo’s lifecycle. Rendered flawlessly in isometric 3D, Super Mario RPG almost looks like a precursor to Square’s iconic Final Fantasy VII, released a year later on the PlayStation. And what higher praise could be given to a fledgling RPG series than a direct comparison to the genre’s most well-known game? Here also was the first-ever instance of Bowser joining forces with Mario; the long-time final boss becomes a party member about halfway through the story. With great characters and loads of charm, this game was an instant classic and remains a crowning achievement of the SNES-era Nintendo-Square partnership.

Over the last three decades, there have been dozens and dozens of Teenage Mutant Ninja Turtles video game adaptations, but none of them have ever come close to matching the enduring greatness of Turtles in Time. Pop the hood on this one, and all you’ll see is a somewhat clunky beat-em-up like too many other arcade ports from the era. But back up – why are you popping the hood at all? Do you really care how well the engine runs when the exterior is this radical? Turtles in Time was never a blast because of any notable gameplay elements, but rather because it let you travel through time and kick the crap out of hundreds of Foot Clan soldiers in New York City, on pirate ships, and in outer space. This has always been a game that got by largely on charm and nostalgia, and why not? When you can take control of ’80s cartoon versions of Leo, Raph, Mikey, and Donny, and just wail mercilessly on Bebop and Rocksteady until they turn on one another and explode, are you really going to wish the D-pad was more responsive? Of course not. Just crank that volume and enjoy the ride. Pizza time! Cowabunga!

An ambitious empire attempts to take over the world, harvesting an ancient magical energy for use in cutting-edge weapons technology. Various people with individual vendettas against the empire join forces in an attempt to save the planet. This alliance consists of people like Terra, an unwilling super-soldier enslaved by the empire for her mysterious magical powers; Cyan, a samurai warrior whose wife, son, and king were killed when their water supply was poisoned by a psychotic imperial officer; Locke, who will never again abandon a woman in need; and Edgar, the reluctant king of a reluctant imperial ally. These were just a few kernels of the expansive and amazing story told by Final Fantasy VI, a game that took place in a world best described as a steampunk-infused version of late nineteenth century Western Europe. Featuring an ensemble cast of fourteen permanent party members, Final Fantasy VI was exciting, touching, and endearing all at once. A crazy-broken combat system turned away more than a few hardcore JRPG fans, but for a certain subset of RPG enthusiasts, there’s never been a better game than Final Fantasy VI. 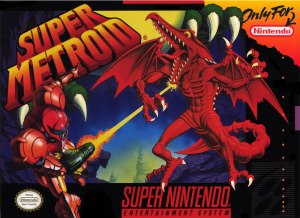 Most of the best Nintendo games come from first-party franchises, and most of the biggest Nintendo franchises were established back in the 1980s on the NES. In a way, the Super Nintendo was the first modern-day “sequel” system, and the new console’s enhanced capabilities allowed game designers to implement all kinds of new gimmicks and features into the newest offerings from familiar and established series. Perhaps nowhere was this more apparent than with Super Metroid, a game whose plot and environment are more or less lifted straight out of the original Metroid. It wasn’t quite an enhanced remake – that would come in 2004’s Zero Mission for Game Boy Advance – but by the same token Super Metroid felt very much like the original game on steroids. That’s no knock; Metroid was one of the best games on the NES, and likewise, Super Metroid was one of the best games on the Super NES. Here, gamers returned to the planet Zebes and once again squared off against the likes of Kraid, Ridley, and Mother Brain. This time around, Samus Aran sought to save a Metroid specimen rather than trying to destroy scores of them, but the general gist of the game was otherwise similar to its predecessor – except, everything was better in every way. Samus had new weapons and abilities like the grapple beam, the X-ray scope, and omnidirectional firing capabilities. The setting had a much more distinct tone this time around. There was far more to explore and there were way more enemies and boss fights. It was just an entirely superior game, and sometimes it’s more impressive to make something better instead of making it new and different.

We’ve already hit on Donkey Kong Country 2 (#9) and Donkey Kong Country 3 (#28), and there’s really very little else to say about this franchise-launching title. Once again, it looked absolutely spectacular with its pre-rendered 3D graphics, made all the more impressive by the fact that they were shoehorned into a 16-bit cartridge. The game’s very release was an achievement and a milestone, and its commercial success was essential for the Super Nintendo during the latter half of its lifespan when next-generation consoles like the Sega Saturn and Sony PlayStation were introduced. And above all, of course, Donkey Kong Country was an exceptionally enjoyable game. 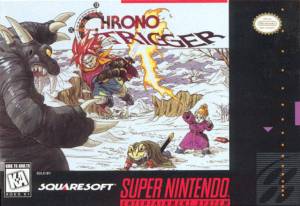 We’ve seen Square, masters of the ’90s JRPG, in the top ten twice already. But it’s not a juggernaut franchise like Super Mario or Final Fantasy that earned the third overall spot in our Super Nintendo Hall of Fame; instead, it’s Chrono Trigger, a game universally loved by all who have experienced it. Endearing characters and an overall impeccable design helped make this game such a delight to play, and to this day it’s still revered by a devout fanbase clamoring for another remake or sequel. The game unfolded in a vibrant and fully imagined world across multiple time periods and could end in a dozen different ways. Striking the perfect balance between linear and open-ended, Chrono Trigger resonated with RPG newcomers and hardcore genre fans alike. No game is flawless, but this one comes about as close to that unachievable level of perfection as anything else out there from any generation. 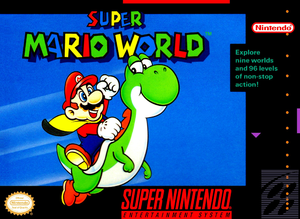 Throughout this three-part post, there have been a number of games that showcased the rapid and impressive evolution of the Super Nintendo’s catalog. It seems only fitting that one of the most highly-regarded games in the console’s library was one of its initial launch titles. Chances are good that anyone who owned a Super Nintendo also had a copy of Super Mario World, a side-scrolling platformer that played faster and looked better than any Super Mario game before it. There were hidden levels. There were flying Yoshis. There was a save feature that allowed gamers to turn their systems off without starting over from the beginning. The existence of seventy-five stages begged for gamers to explore every corner of the game while an abundance of secrets and shortcuts invited quick speed runs. All in all, this was a fantastic game and a great way to introduce the Super Nintendo on a high note.

An epic quest, a slew of challenging dungeons, a dual-world dynamic, a host of brain-teasing puzzles – by combining these elements and many others, A Link to the Past set the standard for what a quintessential Legend of Zelda game should be. It took the top-down adventure vibe from the original NES game, added a legitimate plot, and gave everything a coat of polish until it looked shiny and new. Most will cite Ocarina of Time as the best Zelda game ever – and many will go even a step farther and call it the greatest game of all time – but it was here in the early ’90s that the iconic franchise really established its tone. Calling these top Super Nintendo games “memorable” and “classic” and “timeless” seems like a stale cliche by now, but all of those terms apply to A Link to the Past, gametimebro’s top Super Nintendo game of all time.

At long last, we’ve come to an end. The countdown has ended and the gametimebro Hall of Fame now contains its first thirty games. A future post will likely cover some odds and ends – revealing the ten ballots in full, say – but for the time being, let’s take a moment to bask in the glory that was the Super Nintendo. What a console, what a lineup, and what an era.

Hall of Fame Time Bro is a recurring multi-part feature in which the bros put their heads together to create a collaborative list of games that deserve canonical recognition as all-time greats.